For some reason the liver team where I have my treatment have taken a bit of interest in me and have ordered up a bunch of new scans in interesting machines that I've not been in before so that they can have a proper look at the nasties lurking within.

The first one of these is a MRI (magnetic resonance imaging) scan. These clever things work by using a very powerful magnet to wobble the water atoms in your body in a precise way and measuring the very weak radio wave emissions they give off as a result*. 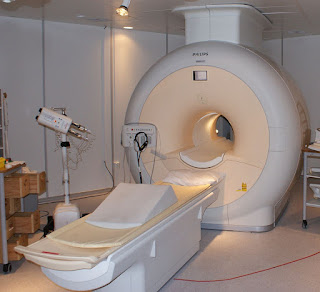 
The procedure for this is first of all to make sure you've got nothing at all in your body that might be ferrous metal because these magnets are strong and would cause metal in your body to move about. The  magnetic field of the one I was in was 3 Tesla and to give you an idea the magnet that holds your fridge door closed is in the order of 5 milliTesla. Naturally you're not allowed to take any metal into the scanner so you're going to be standing around in your underwear and an ill fitting NHS gown for a while.

Also remember I said the radio emissions were weak? Well this means the antennae that detect them can't be far from your body so the tube you lie in is very narrow and you lie right inside the tube so this is definitely not going to be a fun experience if you're claustrophobic. Added to this they strap you to the table so you can't move and make the pictures blurry, Now I'm generally OK with confined spaces but after 30 minutes in here even I was starting to get a bit perturbed.

Oh yes and just to add some more fun for my scan you get a needle in the arm which is hooked up to a pump driver (the bit of kit on the stand in the left of the picture up there) so they can squirt chemicals into you at various intervals. And just to finish they strap another detector right above the liver and what can only be described as a dinner plate attached to a vacuum hose right above that, the purpose of which will be revealed later.

Now in order to get the water in you wobbling in just the right way the machine alters the magnetic field in controlled bursts and this causes small expansions and contractions in the gubbins of machine and this makes quite a bit of noise, so much that you have to wear ear protection. Now when Mrs Draunculus had one of these done privately a few years back she had headphones and got to listen to Enya. Mine's done on the NHS so I got a pair of those disposable foam earplugs. The noise this thing can only be described as a metallic clanging, buzzing, squeaking cacophony, kind of like being inside an early Einstürzende Neubauten gig. Added to this you have to hold your breath on occasions so the person driving the machine occasionally yells instructions to you via an intercom. For some reason best known to medicine you don't hold your breath in, you have to hold it out which is actually quite hard.

So after half an hour of being stuck inside this clanking, warbling Moog synthesizer gone mad the purpose of the dinner plate is revealed. It vibrates. I have no idea why it does this but apparently bouncing your liver up and down very rapidly is required for a couple of the scans. Personally I suspect that it's something the radiographers just do for a laugh.

So that was the MRI done and a week later I'm back for the next scan which is a PET/CT one. Now CTs you already know all about from the Donut of Doom posts but the PET, which stands for Positron Emission Tomography, bit is all new. This works as you might expect by detecting positrons, which are basically the antimatter equivalent of electrons. Now your body doesn't naturally produce these so they have to give you some which is done by injecting you with a type of sugar that's been dosed with a short lived radioactive molecule. Certain things in your body, like cancer cells, just love sugar and hoover it up, particularly if the patient is a dragon who hasn't been allowed to eat or drink anything but water for several hours (oh yes, they starve you before you get scanned for this one). Radioactive sugar is of course a bit tricky to handle so you get a cannula shoved in your arm and the glowing stuff** which comes in a special lead-lined syringe is ceremonially removed from a metal box and squirted into you.

Then you wait for an hour whilst the sugar is taken up by your cells and then you can go and get into the machine which is a bit like a regular CT scanner but with a longer tube you lie in. The scanner whirrs around and does a CT scan and then it starts measuring positrons. Now you can't directly observe a positron but if you remember Star Trek you'll know that the engines of the Starship Enterprise work by putting matter and antimatter together which annihilate each other and convert all their mass into energy*** and this is what happens when your positron, produced as the radioactive sugar decays, bumps into an electron but without the massive explosion above the Vatican or you achieving warp speed. Conveniently the energy produced is a pair of gamma rays which even more conveniently shoot off in exactly opposite directions so when this pair is picked up by opposite sides of the detector it knows its got a positron and where it used to be and by combining thousands of these events along with the CT image it can build a picture up of the tissues where the sugar was taken up.

And all you need to do is lie there for half and hour as you're propelled past the detectors a few centimetres at a time.

So that's the scans done. Now we have to wait to see what the clever surgeons and doctors make of them. Watch this space.


* I had to have two goes at my physics "A" level, you can tell can't you.
** It didn't actually glow, which was disappointing.
*** The bomb in very silly film Angels and Demons worked the same way
Posted by Dracunculus at 07:26 3 comments: