I am Dragon of Borg. You will be assimilated. Resistance is fabulous

I am now part dragon, part machine as I've had my very own implant fitted. It's hardly going to turn me into the Six Million Dollar Man or the Borg from Star Trek however as what they've done is put a gizmo called a Portacath into my chest. It looks like this 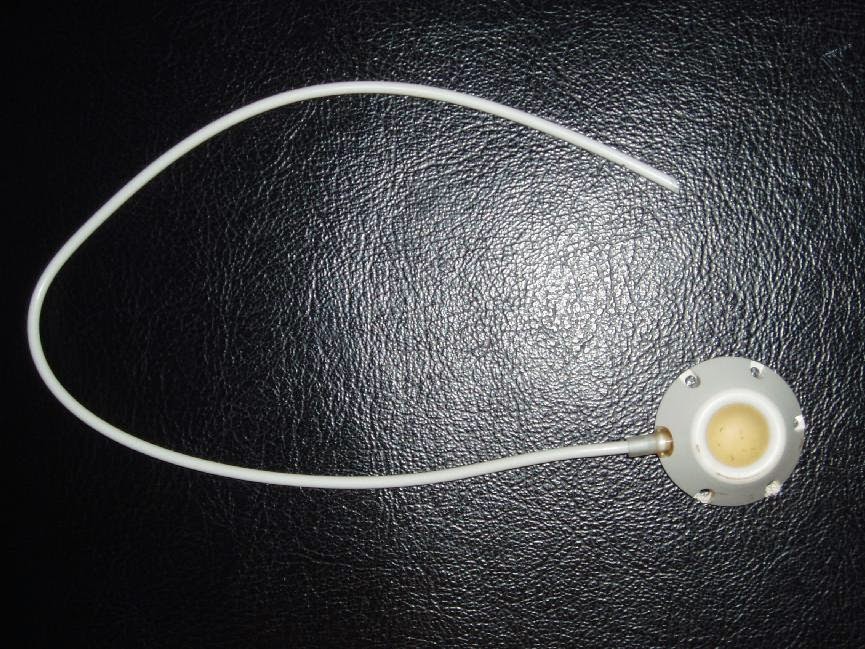 What it is is basically a little chamber with a self-sealing rubber top connected to a catheter tube; it's implanted under the skin in my chest (just above my left moob) and the catheter is fed through a vein so that the entrance is just above my heart. When it comes to giving chemo all they do is pop a special needle into the chamber and all those lovely poisonous drugs get right into me. You may remember last year that I had something similar called a PICC line put in which similarly is used to give drugs and draw blood but the major disadvantage of those is that the end of the pipe is outside the body and needs to be kept covered and scrupulously clean to prevent infection, can't get wet and is prone to damage which to an outdoorsy dragon like me is a right royal pain in the arse. So this time I elected to go for the port. Being tiny and under the skin I should be able to keep riding and gardening without fear of yanking it out or it getting mucky.

So far so good but (and this is cancer, there's always a "but" remember) to insert this baby they need tunnel it under your skin so there's a tiny bit of surgery involved. And paperwork. So first you have to sign the consent form and they tell you all the stuff that can go wrong like you might get a blood clot right up to "If we balls this up we'll puncture a lung, don't worry too much about that as you have two of them."

Anyway I'm wheeled into theatre which had the world's smallest operating table in it which I only just fit on and I'm given a nice whack of Midazolam which belongs to the "wheee I'm floating in the air look at all the cute baby unicorns" class of drugs. Then they whack in the local anaesthetic and there's lots of pushing and tugging for a while, a quick x-ray to check everything's in the right place and then they superglue me shut.

Yes superglue. Just the same stuff you buy from B&Q but in a sterile tube. Originally it was invented for battlefield medical use during the Vietnamese war.

So I'm then wheeled out, given half an hour to make sure I'm ok and to let the woozy drugs wear off and I'm good to go.  "You might need to take some painkillers" they said.

Bloody hell and then some. This is the most painful invasive thing they've done to me so far, Take a look at this (warning - view of my man boob, may not be safe for work, children, wives or servants) 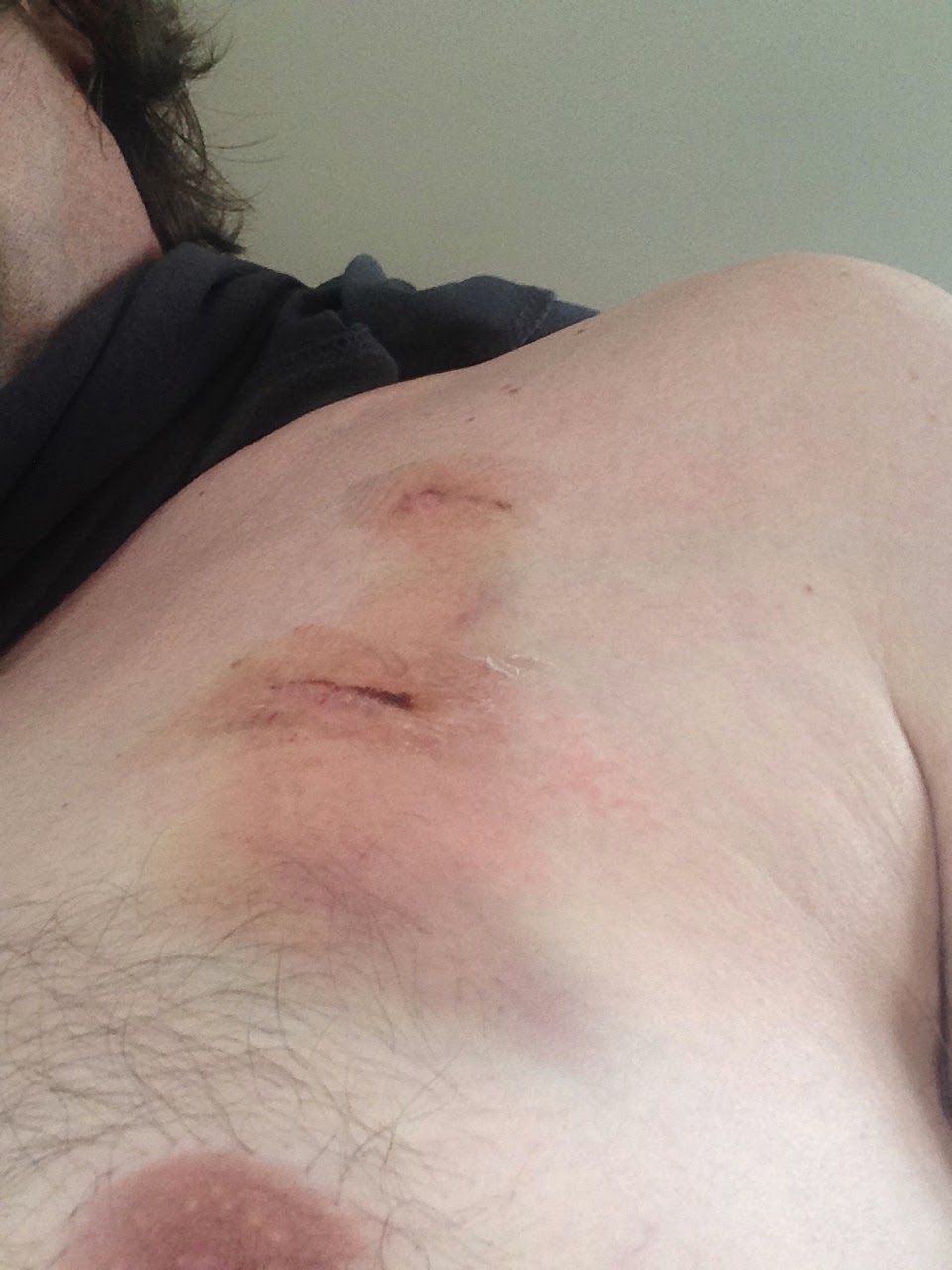 ﻿
That's 48 hours later so starting to heal up but that was not a whole load of fun.

The good news is that you can keep these in for years if nothing goes wrong and they require minimal maintenance so with any luck I won't need to go through this malarkey again.

Now stop looking at by moob!

A year has past since I broke my nose

Well it's been a year now since they said the dreaded words http://littledragoncancer.blogspot.co.uk/2014/01/youve-got-cancer.html

It's certainly been a bit of ride for the past 12 months and of course it's a ride I'd rather not have been on but it's not all been doom and gloom. And the best bit is I'm still here.

And I will be this time next year.

Posted by Dracunculus at 07:14 No comments:

Happy Birthday, your cancer's back

Today is my 50th birthday. Yes your old dragon successfully made it to a half century of rotations around the sun. It's been a blast so far and I wouldn't have missed any of it... well maybe that bit when I was on a ferry in a storm in the North Sea and I managed to projectile vomit the length of the ship.

Unfortunately, and there's always an unfortunately with cancer, there was an unwelcome e carly birthday present this week when I went to get my results from the Donut of Doom and got the news that the liver metastases had started to grow back. Not by a huge amount, one of them by about a centimetre, but definitely on the march again. Fortunately it doesn't appear to have spread anywhere else so far which is a definite plus.

To be honest I was expecting the news. Since around the new year the fatigue has started to creep back and I was starting to get the liver capsule pain after eating which is what happened before. I told myself that it might be that I was run down after having had a persistent cold on the run up to Christmas and that the rest might be a bit of indigestion but being honest I knew.

So the plan is to whallop it with some more chemicals. Different ones this time with a regime called FOLFRI where the miracle wonder ingredient is Irinotecan which stops DNA from unzipping and thus buggers up cell growth. Happily unlike the platinum based drugs I was on before this doesn't give you the problems with cold screwing up your fingers and toes but it does cause hair loss and apparently can give you the most monumental squits. What fun.

I'm also going to be put onto a monoclonal antibody, Cetuximab which is some Frankenstein's Monster drug made by combining mouse and human genes. I'm quite comfortable with that and to be honest if they came up with something which worked that was made by throwing cute kittens and fluffy pink unicorns in a blender I'd be at the head of the queue to guzzle it down. If I suddenly start squeaking and raiding the fridge for cheese though I'll be sure and let you know.

Interestingly given the early pre-election skirmishing over the NHS and the withdrawal of some of the extra money for cancer drugs Cetuximab is one of those drugs that my oncologist has had to apply to the Cancer Drugs Fund for. I did mention that I was lucky to get in before they withdraw some of the money in March.

"Not at all," says he. "Cetuximab is still available and the only bowel cancer drug that's being withdrawn is one I don't use because, quite frankly, it hardly ever works."

So there you go. All the scaremongering about hundreds of cancer patients dying because of evil nasty government cuts is, quite frankly bollocks.