So I'm back on the real chemotherapy now having been found out that we can't just use the monoclonal antibodies.

However the good news is that my new chemo drug is Capecitabine which comes in the form of rather large pinky orange pills which I take for 7 days and then have 7 days off. I have to say it's a lot easier than messing around with the 46 hour infusion of 5FU with it's attendant fatigue, nausea and having to schlep up to Wisbech on a Friday afternoon. "Cap" to its friends is rather clever in that it's a "prodrug" which means that in itself it doesn't do anything but the liver synthesises it into the active drug which just happens to be the aforementioned 5FU.

The only downside is the palmar-plantar syndrome which is quite a bit worse on the pill version of 5FU than the infusion. After two treatments my hands are starting to split, not badly but enough to be painful when it happens and I'm having to be a bit careful around the ponies in case of picking up infections. It's buggering up my feet as well so I do tend to totter around rather than walk when it gets bad but I'm still mobile.

Which is a good job as I've got a dragon to feed. 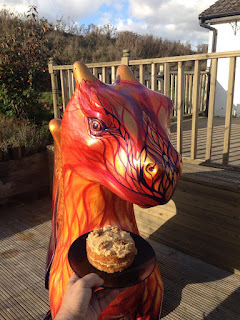 She called Raptors Fire, likes cake and has her own Twitter account at @raptorsfire
Posted by Dracunculus at 03:33 No comments: