Now I know I shouldn't be worried, my side effects from chemotherapy have been pretty mild so far, certainly compared to the horror stories I read about on the forums. The drugs are still working so far, the last scan showed a small reduction on the liver metastases and apart from a few niggles with planar/plantar syndrome I feel pretty healthy.

And over the last few weeks it's that "so far" that's been nagging at me. The anxiety that I've had a year and a half and median survival is two years. The stress of wondering every chemo session if the portacath is going to behave. Worrying that every sneeze and sniffle is the beginning of the neutropenic sepsis that's going to have me joining the choir invisible*. It was getting to the stage where I really was getting myself quite wound up the day before chemo and also, sorry Mrs Dracunculus, probably being a bit of a mardy git into the bargain.

So something needed to happen in the head department. I needed some kind of bonce doctor to peer inside this dragon's head and, I don't know, tell me it's all because I loved my mummy or something.

Anyway it turns out there's this charity called Maggies who, according to their blurb, offer "practical, emotional and social support" to cancer patients and their families and I knew there was one of their centres on the hospital grounds at Addenbrookes so last week I toddled over, took a deep breath and walked in. Weirdly its probably the toughest thing I've done during the whole cancer malarkey; the medical side is easy, that's just being poked and prodded. This is admitting that you're not as tough as you thought you were, that your emotions are shot to hell and that you need help.

Which is stupid when you think about it, treating how you cope with this bastard of a disease is just as important as treating the tumours themselves. Perhaps it's a hangover from the "big boys don't cry" generation I was brought up in but I would say to anyone going through any illness or trauma that it's OK to ask for help and you probably should.

So the volunteer I talked to immediately sorted out a cup of tea in the traditional English ritual that there's nothing that can't be fixed so long as you've got a mug of builder's and she arranged for me to see their psychologist who we'll call Dr. Bonce, notice he's a psychologist not a psychiatrist - there's a difference, and earlier this week I duly pop back and we have our first session.

Not surprisingly what I'm going through is completely normal and, after a lot of questions which determined I wasn't about to turn myself into pavement pizza by throwing myself off the roof of the hospital multi-storey car park, he tells me that it's my "threat centre" that's somewhat overactive. Apparently that's the bit of the brain that kept us alive when we dressed like Raquel Welch in One Million Years BC 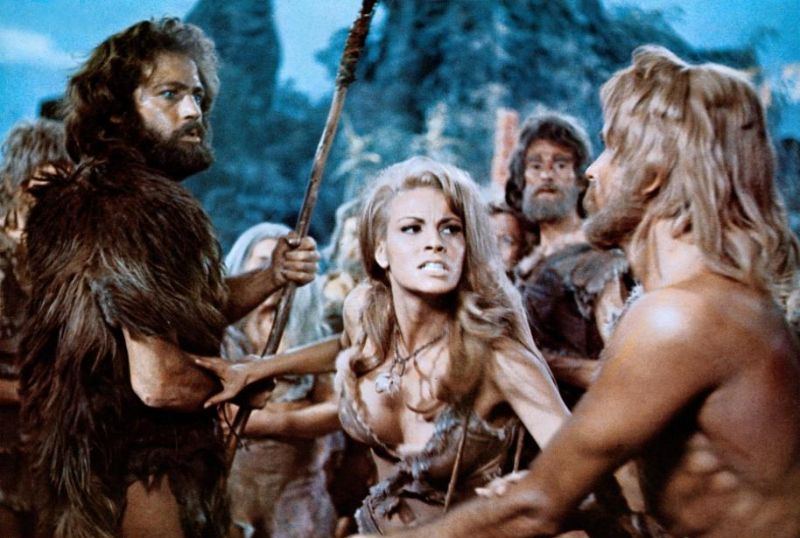 Also one of the fun things about this bit of the brain is that exaggerates threats, so that rustle in the bushes is a lion about to pounce or these days that twinge is your portacath lumen breaking loose and lodging in a particularly inconvenient artery, and that's why you get anxious.

So what's the plan. Well I'm booked in for a few sessions with Dr. Bonce and he's going to teach me some stress reduction exercises and something called "mindfulness" which appears to be something about putting yourself in the moment and stopping worrying about the future. All sounds like good stuff that I can use and, to be honest, just going and talking abut this stuff to someone has helped a lot.

It's good to talk.

* I'm a baritone in case The Almighty is reading this blog
Posted by Dracunculus at 08:17 1 comment:

For those of you that might have been worried (all 2 of you) I am still here and reasonably hale and hearty. I haven't been posting much because, well, nothing has really been happening. The old routine re-established itself after my chemo break and everything just chugged along.

But now I'm coming to the end of this round of chemo with cycle 12 of FOLFRI and Cetuximab staring tomorrow and a slightly out of sequence spin in the Donut of Doom happened earlier today. So what happens now? Well after a couple of chats with my oncologist it seems we just keep on keeping on. I'll get a short break for 4 weeks and then, assuming the scan shows the cancer hasn't grown, it's back to the nasty chemicals every 2 weeks.

Why only four weeks. Well that's the lovely caring NHS and the bollocks that is the Cancer Drugs Fund. The rules state that if you take a break of more that 4 weeks from Cetuximab then you lose the funding for it and can't have it again. Ever. From what I've been able to tell there's no clinical reason for this it's just a rule they have, probably purely for cash reasons. Seems to be plenty of money to splash out on ridiculous overseas aid projects and high speed rail line vanity projects but if you need these pricey* chemo drugs then sod you.  Not that private healthcare is much better, my private medical insurance has a specific clause in it that excludes cover for monoclonal antibody treatments.

So it's four weeks off and then another three months of fortnightly poisoning.

And how long can we keep this up? Well the answer seems to be "as long as you can stand it", or alternatively as long as the Donut of Doom says it's still working as I presume at some point the cancer becomes resistant to the chemical soup.

And how long can I stand it? Well to be honest I don't really know. Sure the three days of treatment and the couple after are not fun but it's bearable since we fannied about with the nausea medication** and the skin cracking is under control thanks to liberal applications of skin care gunk they usually use to treat eczema (hey, whatever works!).   What's hit home is the realisation that I'm now on this stuff forever. I suppose it's no worse than, say, dialysis for a kidney patient but it still a rather scary thought to wrap you brain around.

But I'm an awkward git (comes of being a dragon you see) and so long as it's keeping me still here we'll keep on doing it.

** Metaclopromide, Ondansetron and Domperadone. All I'm missing is Aprepitant for the full house
Posted by Dracunculus at 07:58 No comments: