I rather like the opera, sure it takes ten minutes in opera to say you would like a cup of tea because six people have to sing the line about wanting tea and how wonderful tea is about thirty times but that's fine; something as important as tea is worth taking time singing over.  Anyway just before Christmas I was lucky enough to get to see a performance of Donizetti's comic opera "The Elixir of Love", the story of which revolves around a love-struck young man and a fake potion sold by the quack Doctor Dulcamara that'll cause the unattainable object of our hero's affections to fall madly in love with him. 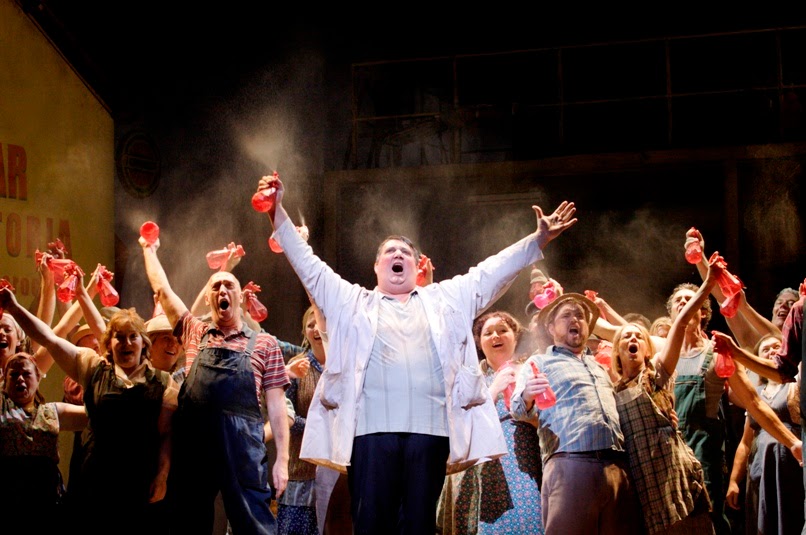 The joke is that the "love potion" is nothing of the sort, just a bottle of wine, but in the end the boy gets the girl and everyone gets a curtain call.

However this week I was reminded of Doctor Dulcamara as a couple of things on the medical front happened (not to me) in the past week. Firstly there has been a private members bill* passing through parliament recently known after its sponsor as "The Saatchi Bill" but more formally as The Medical Innovations Bill which on the face of it sounds like it makes sense. The idea is that doctors should be free, with the patients consent, to try out new experimental treatments for cancer and other life threatening diseases without the fear of being sued for negligence if the patient subsequently explodes or is transformed into a eighty foot tall monster who goes on to ravage down-town Tokyo.  You can read a bit about it here and the fact that the normally useless Lib Dems make have actually done something worthwhile and killed it off.

Now initially I thought that The Saatchi Bill might be a good idea but after a bit of thought it's actually a pretty terrible one and would in essence run the very serious risk of being little more than a charter for your real world Doctor Dulcamaras. There is experimental and innovative treatment being offered to cancer patients all the time, from the likes of the FOXFIRE trial that I'm taking part in to new medicines that are so shiny they don't have names yet, just serial numbers. However all these treatments have in common is that there's some science been done to show that at least in theory its more curative than harmful and its at least been looked over by an ethics committee to ensure that it's probably not going to injure you or subject you to undue risk. Of course there are always risks; FOXFIRE I recall had a 1 in 1000 chance of completely destroying your liver but at least there were safeguards and one of those safeguards is the knowledge in the medical team that if they are reckless they're going to get sued up hill and down dale.

The problem is of course the big scary "Cancer" word. The drug treatments that are known to work are invariably toxic and they only work for so long so those of us with the disease, particularly advanced stages of it, are looking at long treatments that are aimed at keeping us alive for a bit longer and as one treatment after another becomes ineffective then desperation is in some cases going to take hold and regrettably people fall prey to every kind of mountebank and charlatan out there with the latest and greatest miracle cure. I'm sure some of these people who recommend and supply genuinely believe that sticking a litre of coffee up your jacksie five times a day as the "Wellness Warrior" did will cure you, or apricot kernels or whatever is the latest "wonder" thing that "big pharma" don't want you to know about. But let's face it they don't, it's just pseudoscientific woo.

Of course you're never going to stop this and here's an article showing the kind of pickles people get themselves into when they hop on the "alternative" train but at least with the defeat of the Saatchi bill we won't be adding to the problem.

And what about me, you may ask? Sure you're OK now, maybe the Cetuximab is giving you a complexion you thought you'd left behind when you were 13 years old but its working. What happens when it stops working and you're looking at the big guy with the scythe who TALKS IN CAPITALS, wouldn't you grab at anything?

No, I'll put my trust in science and reason and by all means enrol in any phase 1 trails that a going but more out of a "at least I might do some good" motivation rather than "I'll do anything for another three months" but I won't be grasping at phantom promises of the woo merchants.  I'd rather go out and buy the most expensive bottle of Bordeaux that I can find.

After all, if it's good enough for Dulcamara's love potion...

* for my non UK readers a bill is a draft law and a private members one is a law that's proposed by a single member of parliament or the House of Lords rather than the government of the day.
Posted by Dracunculus at 05:39 3 comments: