Not so happy new year

Well I did say I was going to try and have Christmas and the New Year off from hospitals, poking and the like but as Edmund Blackadder once observed "The path of my life is strewn with cowpats from the Devil's own satanic herd!" and I never made it to the early January regular appointment.

The Ascites and the pain associated with it got worse... and worse. Managed to see the GP just before Christmas and he got me onto Oramorph, a liquid form of morphine which is stronger that the semi-synthetic opioids I've been taking and that just about got me through the Xmas bank holidays although my Christmas lunch was a tiny bit of turkey and stuffing, a roast potato and a very lonely pig in blanket. Big, jolly spirit of Christmas Present I most certainly was not. By the Wednesday thing were starting to get even worse, food was becoming almost impossible to eat as anything above a couple of mouthfuls was coming straight back up, unlike at the other end where nothing was coming out. The "Emergency Oncology Number" at the hospital was about as much use as a chocolate teapot; they seem fine when you're actively taking chemo but all they came up with after some faffing around was "you should go to A&E"

Now I'm of the old school where you go to Accident and Emergency when your leg has been torn off or your heart is trying to exit your ribcage with a vengeance. Sure this was bad but not an emergency so I just put up with it for another night.

Probably not that smart. In the morning put in a call to the GP

So much for the wait for 4 weeks for an appointment*

However Dr H is in a bit of a bind, it's obvious I need something doing to drain this fluid but he can't book me into anything as he can only send me to King's Lynn who don't know me from a hole in the ground and there's no clinical notes or from Cambridge. So he sends an urgent fax (yes fax, this is the ultra-modern NHS) to the oncologist and will call me back. In the meantime here's some slow release mophiene

Following morning I ring them, nope no reply yet and then around 4pm he calls me. "Not heard anything, can't contact anyone, looks like they've knocked off for New Years Eve weekend. Do you think you can cope?"

I catch a glimpse of myself in the reflection from the kitchen window, sunken face, staring eyes, dehydrated and grimacing in pain. I look like an extra from a George A Romero zombie movie. 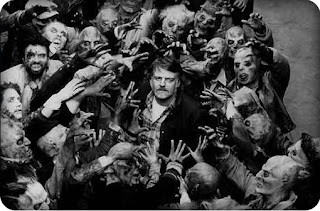 
I'm a proud, maybe stubborn dragon but I need help.

Two hours later I'm in the Medical Assessment Unit at the Queen Liz II, ripped to my wingtips on painkillers, IV fluids going in and booked in for a drain in the morning. I'll gloss over the next 48 hours as that's a blog post on its own but by the end of New Years Day I'm back in the lair and 5.5 litres of yellow peritoneal gunk lighter.

So a week later having had a rocky road back to something approaching vertical that appointment with Dr A comes around so off I go back to Addenbrookes.

And this is where I got the news that I'd kind of being expected and that I wanted to let everyone know about.

Basically, your winged friend is toast.  The cancer has spread to far and I'm too unwell to receive any more treatment for it as it'll just be counterproductive. So although it seems to be the word they don't use any more my condition is now terminal.

Dr A was excellent throughout, just as he has been for the last three years. I really could not have wished for a better consultant throughout this whole drama and yet again he was up front and honest about timescales.

We are looking at weeks.

As long as I'm comfy as possible I can take that. And they are working very hard at comfy - more on that to follow.

* Although saying the magic C word doesn't half shift things along.
Posted by Dracunculus at 07:14